Excerpt from the Screenplay: Vice vs. Vampyres by Brad Havens

Joe hesitates. He swallows, trying to get his head back.

Get outta there, Joe, goddamnit!

Joe fades back into the shadows. Working his way back the way he had come. He opens the side door to find MR. W standing there aiming a pistol at him.

Mr. W hesitates. Joe jumps at him, securing the gun and delivering an elbow to the face. MR. W goes down, clearing the door. Joe checks the gun, then lunges through the door.

A BIG SOMETHING moves with blurring speed, knocking him backwards sprawling across the dance floor.

Darren and Senko react in surprise. Carson looks back at them.

Joe recovers and looks across the twenty feet to where he was just standing. Karl stares back at him with an intrigued expression. He pulls MR. W to his feet, handing his pistol back to him.

Joe gets to his feet, drawing his gun.

Karl BLURS in speed and takes him, gripping Joe's forearm tighter until he drops the pistol.

MS. M and Vlad enter, taking in the scene.

Karl smiles broadly at Vlad, showing his prize. Joe tries to leverage out of Karl’s grip to no avail. Karl kicks the feet out from under him and Joe faceplants. Karl notices the wiring from the battery pack on Joe's belt and yanks the rig out into the open.

Darren moves to the back of the van where Carson is already LOADING A SHOTGUN.

VLAD squints at it, not understanding. MS. M thinks maybe it’s a bomb, but MR. W sees it for what it is.

She stifles a laugh. Vlad smiles, much more at ease.

Joe takes the moment to roll away to a standing position, drawing his badge and a backup pistol and aiming at the nearest target. Karl stands delighted by the performance.

That’s right, I’m a cop. And you're all are under arrest!

Popular posts from this blog

Vice vs. Vampyres - "The Badge meets the Bite!" - the Radio Play WORLD PREMIERE 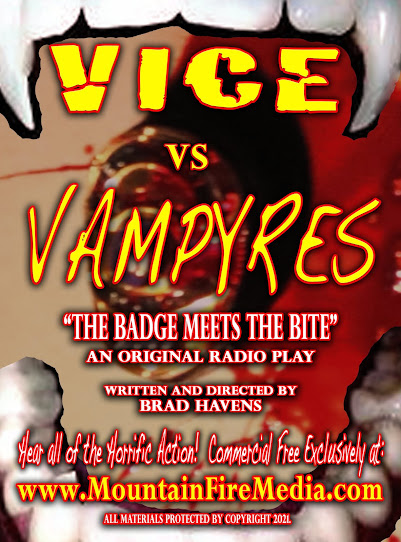 MountainFire Media, LLC presents VICE vs. VAMPYRES "The Badge meets the Bite" An Original Radio Play  Written and Directed by Brad Havens The Story So Far: Joe and his Team of wayward Vice Cops take one last shot at redemption when they take on a White Slavery Ring operating out of a night club, only to discover it is operated by a Den of Old World Vampyres! It's time for Vampyres to be the Monsters they always were - Savage, Sophisticated & nearly Immortal! What better way to demonstrate their power than pitting them against a Team of desperate Vice Cops willing to bend the Law to save their own skins?  Two very different types of Predators locked in a deadly Game of Survival - it's Kill or be Killed with only one chance at Escape! 70 minutes of genre bending non-stop Action Suspense and Horror for Fans of Audio Entertainment everywhere! Commercial Free, complete MP3 Digital File of the Feature Radio Play, the complete Soundtrack and more available for Direct Do
Read more

Brad Havens
Random thoughts from the mind of Brad Havens. NOT for everybody.